While Christmas only comes once a year, new behind the scenes photos and videos of The Punisher S2 surfacing are gifts enough for this fan. It’s a very good time of year for us fans of Netflix’s Marvel shows. Daredevil’s season three seems well underway, Iron Fist S2 has started filming, and Luke Cage season two premieres June 22nd of this year.

To me, the most anticipated one is the second season of The Punisher. Jon Bernthal knocked his role as Frank Castle out of the park in the first season. Another stellar performance was Ben Barnes as Frank’s now frenemy Billy Russo. If you haven’t finished watching the first season, turn back now because there’s spoilers ahead.

We all remember the cringe-worthy scene of Frank dragging Billy’s perfect face down broken glass, which was the beginning of Billy becoming the infamous Marvel villain Jigsaw. Since then, we fans have pondered what will become of Russo’s former good looks? The comic books portray Jigsaw as a truly hideous creature and his live-action rendition in Punisher: War Zone was harrowing.

Below you can see a video from recent filming and I’m also linking Just Jared because he has some amazing behind the scene photos of Frank and Billy.

Upon looking at the video and pictures, you may think, this doesn’t look that bad. Frank dragged Billy’s face against shards of glass like it was a cheese grater. So, why does the scarring look so mild? Maybe it was due to being in surgery for so long, but even with advanced medicine, he should have walked away with worse battle wounds.

My only theory is that we have been tricked before. When Captain America: Civil War was filming we got a glimpse of Frank Grillo’s Crossbones, who didn’t look nearly as bad for a guy who had a building fall on him: 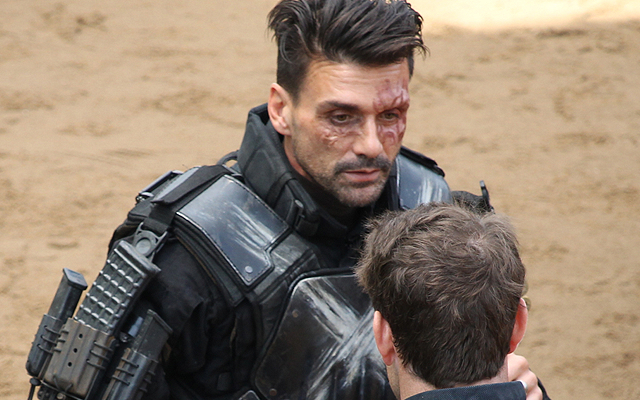 But, when the film came out, we saw that special effects had had its way with him:

I’d say, let’s let Grillo’s Crossbones be an example that Marvel doesn’t like showing the audience their big reveal before their movie/television shows come out. Marvel knows we fans are constantly watching, so I believe that what we see with Billy Russo won’t be the final product.